The word "Advent"comes from the Latin Adventus, which means "coming to". In the West, Advent is the beginning of a new liturgical year, and lasts from the fourth Sunday before Christmas until the Nativity of Our Lord. The first Sunday of Advent is thus the Sunday nearest the feast of St Andrew the Apostle (30 November) and will always fall between 27 November at the earliest and 3 December at the latest.

The liturgical colour for this season is purple (usually a deep, "royal" purple as opposed to the lighter, red-violet shade of purple associated with Lent: see para 356 of the GIRM). In the time of Innocent III (1198–1216) black was often used to emphasize the penitential character of the season; in England, the Sarum Use also prescribed black, although blue is sometimes used in some Anglican churches. On the third Sunday of Advent, Gaudete Sunday, rose vestments may be worn.

Like Lent, Advent is a preparatory season. It is a season of looking forward and waiting for something wonderful— for the annual celebration of Christ's birth, and for the time when Christ will come again.

During Advent, we are asked, in the words of the old Catholic Encyclopedia:

No one is quite sure when Advent first began to be celebrated as a special season. We know that the feast of the Nativity of the Lord (Christmas) was celebrated from the late fourth century onwards (sometimes on 25 December, sometimes on 6 January) and homilies from the fifth century refer to a season of preparation, although it is not given a special name or liturgical form (see Maximus of Turin, 415–466, In Adventu Domini). A synod held at Mâcon in 581 ordered that from 11 November until Christmas, Mondays, Wednesday and Fridays would be kept in the same way as during Lent.

A collection of homilies from Pope St Gregory the Great (pope 590–604) included a sermon for the second Sunday of Advent, and by 650 Spain was celebrating the Sundays of Advent (five at the time). It seems the liturgical season was established towards the latter part of the 6th century and first half of the 7th century. For the next couple of centuries, Advent was celebrated for five Sundays; Pope Gregory VII, who was pope from 1073—85, reduced the number to four.

In the Ambrosian and Mozarabic rites, there is no special liturgy for Advent, only a fast. But the Roman rite provides a different collect for every day of Advent, and a rich collection of scriptural readings on which the antiphons of the Divine Office are based. Fasting and penance are no longer required. Instead, the emphasis is on joyful expectancy. We shall be looking at the themes of the Advent liturgy over the next few weeks.

Finally, three Advent traditions worthy of mention. The Jesse tree, named for the father of David, is a tree gradually decorated as Advent progresses with symbols or pictures of the Old Testament persons associated with the coming of the Messiah.

Quomodo Veniet? (How will he come to us?) On the First Sunday of Advent, or on Gaudete Sunday, small cards are offered to everyone in community/household/parish bearing on the back a phrase from scripture indicating how the Lord may come to us this Christmas. Popular choices include Adonai (the Lord), Radix Jesse (Root of Jesse), Sol Oriens (the Rising Sun), Rex Gentium (King of the Peoples), Ego sum, nolite timere (It is I: do not be afraid), and so on.

The Advent wreath is a modern adaptation of a tradition from Lutheran Germany: a circle of living greenery, signifying God's eternity, and decorated with four candles, one for each Sunday of Advent, signifying the Light of the World whom we await.

Every day at Vespers (Evening Prayer), the Magnificat (Canticle of Mary) is accompanied by an antiphon or refrain which gives a particular focus to the celebration. From the 17 to 23 December a special sequence of antiphons is used known as the O antiphons (all begin with the word "O") or Greater antiphons. They are of ancient origin although no one is quite sure when they were first used. Boethius (fifth century) mentions them, and by the eighth century the abbey of St Benoît sur Loire had elaborated a solemn ritual which most Benedictines still use today.

The antiphons are sung by different members of the community (usually the seniors), and "care" is taken to ensure that certain officials receive antiphons appropriate to their office. Thus, the gardener is thought a good choice for O Radix Jesse, while the cellarer (bursar) is considered a fitting match for O Clavis David. 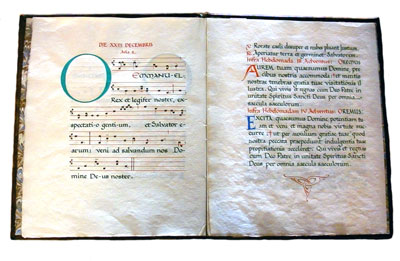 The O Antiphon Book used at Stanbrook Abbey
A specially grand book is used for the antiphons and the singing of them is accompanied by the ringing of all the church bells. In former times there were pittances in the refectory to mark the day. Thus, the gardener might give the community a few dried plums or raisins; the cellarer might add an extra allowance of wine, and so on. The intention was to mark these days out as days of proximate preparation to Christmas, at once solemn and joyful.

At present, there are seven O antiphons in use. Each addresses Christ using a Messianic title drawn from the prophecies of the Old Testament. Read backwards, the initials of each title in Latin form the words Cras ero or "Tomorrow I shall be (with you)".

In the Middle Ages not only were different melodies sometimes used (the Worcester Antiphoner, for example, has some very elaborate settings for the antiphons) but even the number of antiphons varied. According to the Sarum Use, eight antiphons were sung so the whole sequence began a day earlier and ended on 23 December with O Virgo virginum. That made the initials read Vero cras. "Truly tomorrow (I shall be with you)"

The structure of the seven antiphons we now use is essentially the same. After the invocation of Christ as Messiah comes the plea: come and show us the way of prudence, come and save us with outstretched arm, and so on, and all the antiphons follow a similar musical pattern. The music for the first of the antiphons is shown below, but you can hear each being sung if you click on the player button beneath the texts. The melody ducts and weaves around what our friend, Fr Alex Lane, describes as "an unstable note in the Second Mode, which suggests just how fragile we are."

If you want to follow the antiphons through the week, here are the texts in Latin and English, with a few suggestions about the scriptural texts you might ponder in connection with each. If you click the icon beside the date, you can listen to the Latin antiphon being sung. Probably the best-known version in English is the hymn "O come, O come, Emmanuel".

17 December
O Sapientia, quæ ex ore Altissimi prodiisti, attingens a fine usque ad finem, fortiter suaviterque disponens omnia: veni ad docendum nos viam prudentiæ.
O Wisdom, you come forth from the mouth of the Most High. You fill the universe and hold all things together in a strong yet gentle manner: come to teach us the way of truth.
Isaiah 11:2-3; Isaiah 28:29


18 DecemberO Adonai, et Dux domus Israel, qui Moysi in igne flammæ rubi apparuisti, et ei in Sina legem dedisti: veni ad redimendum nos in brachio extento.
O Adonai, and Ruler of the house of Israel, who appeared to Moses in the burning bush, and gave him the Law on Sinai, come to redeem us with outstretched arm!
Exodus 3; Isaiah 11:4-5; Isaiah 33:22


20 December
O Clavis David, et sceptrum domus Israel; qui aperis, et nemo claudit; claudis, et nemo aperit: veni, et educ vinctum de domo carceris, sedentem in tenebris, et umbra mortis.
O Key of David, and Sceptre of the house of Israel, who open and no one shuts, who shuts, and no one opens, come and free from prison him who sits in darkness and the shadow of death.
Isaiah 22:22; Isaiah 9:6. It would be useful also to consider the promise, "Behold I stand at the door and knock . . ."

The old English name for Christmas is Cristes Maesse, Christ's Mass, first found in 1038. Christmas is not among the most ancient feasts of the Church, although there is evidence of its having been celebrated by Egyptian Christians around the year 200, when it was kept in the month of April or May. Interestingly, current scholarly opinion suggests that April or May is more likely to have been the month during which Christ was born than December.

Cappadocian Christians were celebrating the birth of Christ on 25 December by the time of St Basil the Great (fourth century) but there was no hard and fast rule as the Nativity of Christ was closely associated with Epiphany and there seems to have been something of a double celebration stretching from December to January. The indefatigable Egeria was fascinated by the celebration of Epiphany in Jerusalem in the fourth century and mentions such customs as the bishop's going nightly to Bethlehem; but there is no mention of Christmas as such, and no special celebration on 25 December.

In Rome the celebration of a feast of the Nativity seems to have become general during the latter part of the fourth century. It was assigned to 25 December, the well-known solar feast of Natalis Invicti, and became general in the west. In medieval times it was a popular day for important ceremonies: Charlemagne, for example, was crowned Holy Roman Emperor on Christmas Day 800.

On Christmas Day three Masses are celebrated, and have been since early times: the Midnight Mass, Dawn Mass and Day Mass, each concentrating on different aspects of the Christmas story.

Epiphany, as its name suggests, was a feast which began in the east and arrived later in the west than the celebration of Christmas. The "epiphanies" or manifestations of Christ's glory took many forms. Even today, the Magnificat antiphon at Vespers (Tribus miraculis) recalls not only the coming of the Wise Men (the manifestation to the gentiles) but also the Baptism (the manifestation to the Jews and the espousal of the Church with Christ) and the miracle of Cana (the manifestation to the disciples). Originally, the Baptism seems to have been the most prominent liturgical theme, but when the feast was incorporated into the western liturgy, the coming of the Magi became predominant. Epiphany became the day, too, when the date of Easter was solemnly proclaimed.

From Christmas to Epiphany is traditionally twelve days, the "Twelve Days of Christmas". Gradually the feast of the Baptism became separate from that of Epiphany and is now usually kept on the Sunday following the Epiphany. It marks the end of the Christmas season, although there is one last "look-back" on 2 February, the feast of the Presentation of the Lord (Candlemas) when it is customary to eat one of the special foods of Christmas as a reminder.
Back to Menu