St Benedict and his Rule 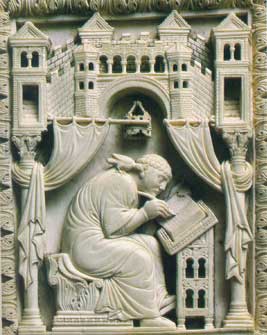 Almost all we know about St Benedict comes from St Gregory the Great's Dialogues, where he says that Benedict, vir Dei benedictus, the blessed man of God, 'wrote a Rule for monks that is remarkable for its discretion and its clarity of language' (Dialogues, Book 11, ch. 36) Although the original manuscript of the Rule (often referred to by its initials, RB) has been lost, the Codex San Gallensis 914, from the early ninth century, is generally accepted as authoritative. The Oxford MS Hatton 48, though earlier by a century, is less faithful because the copyist tried to improve on Benedict's Latin (which is good sixth-century Latin though not classical).

The Rule itself is the best witness to Benedict's life and character, showing us someone who was wise, kind, steeped in scripture and concise in expression. In fact, there is something very 'English' about Benedict, with his calmness, his gift for organization and his occasional touches of humour. Perhaps that is why Benedictine monasticism, for both men and women, became so pronounced a feature of English Church life before the Reformation.

Compared with earlier monastic writers, especially the author of the Rule of the Master, from whom he borrowed and adapted copiously, Benedict is much more moderate in the demands he makes on people. The way of life he prescribes allows the monk (or nun) enough food, drink and sleep without letting any luxury, self-indulgence or, above all, private ownership, creep in. Prayer, work and reading make up the content of the monastic day, just as abbot and community make up the context, so to say, in which monastic life is lived.

Benedict was aware that his Rule would need to be adapted to different times and circumstances. Already in the text there is a wide discretionary power given to the superior. In the matter of clothing, for example, Benedict recognizes that more will be needed in colder regions and less in warmer and leaves it to the abbot to decide what is appropriate. He is also flexible about the arrangement of psalms in the Divine Office 'provided the full complement of 150 is said every week.' It is this adaptability and sanity that has made the Rule so enduring. It would be wrong, however, to conclude that Benedict is somehow less demanding than other monastic legislators. His intention is that 'the strong should have something for which to strive and the weak nothing from which to shrink' as we make our way to God in community.

The text of the Rule is quite short and can be read through in an hour. Along with practical details about the organization of the monastery, there is much spiritual teaching of a plain, Christocentric kind.The monk is a disciple, always alert to the word of God: he must therefore be humble and attentive, ready to greet Christ in the stranger or serve him in the old, the young, the sick — anyone he may meet. Purity of heart, as the monastic tradition understands it, prepares us for a closer union with God. The whole point of monastic life is to prepare us for that union and lead us to it. That is why Benedict speaks of searching for God in the school of the Lord's service.

Today the Rule of St Benedict is followed by thousands of people as monks, nuns and oblates (people who try to live according to the Rule insofar as their circumstances allow, not in monasteries but "in the world") and there is growing interest in what St Benedict has to teach those who would not describe themselves as particularly religious but who desire to live in a more human and humane way.

Little by little the Rule seems to make saints of some very unpromising material. In our older brethren we often see what grace, generously co-operated with, can achieve.

The Daily Reading from the Rule (RB)

As novices we learn the Rule by heart and every day part of the Rule is read aloud in community. You can listen to the daily portion of the Rule using the Box below. Check the Resources section for further reading about the Rule.


what seems better for himself


but what seems better for the other instead